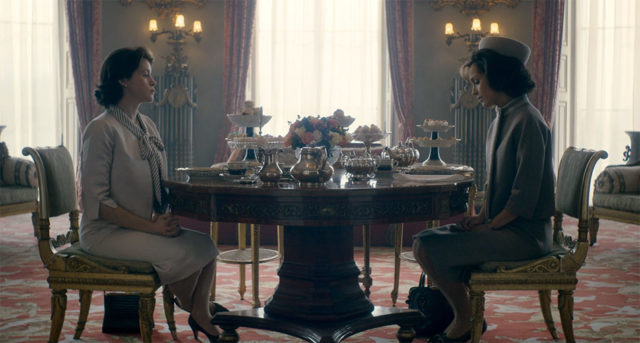 As she was handed her nine o’clock cuppa last night, Irene Collins paused The Crown, pointed at the screen and said, “In future, I want it served just like that?”

“You want a flunkey?” a puzzled Trotsky inquired.

“Can’t you wear your new suit when you bring it?” Irene sighed, as she pointed imperiously at the door and waited until he’d left before pressing play.

Trotsky afterwards said The Crown was beginning to have a deleterious effect on Irene. “She’s taken to spending hours online, looking up obscure points of etiquette”.

When pressed for details, he replied, “She asked me recently if I knew that a lady can wear a hat indoors until 6pm?”

“I tried to take her temperature when I heard that,” he recalled, “but she wouldn’t let me…”

He said Irene had also begun using her handbag to send him messages, the way the Queen uses hers to signal staff. “Last night she told me if she moves it from the right arm to the left, it means she’s bored with the conversation. I said ‘What bloody conversation?’ because she called me in from the kitchen to tell me that”.

At first, when asked why his wife insists he leave the room everytime The Crown is on, Trotsky would only say “the rot started with Downtown Abbey“.

But when pressed, he eventually agreed it was because he couldn’t watch either without pointing out how much better the servants’ conditions would have been, if they were in a good trade union.