Members of a Galway city suburb’s tightly-knit peer group, led by 26 year old trainee life coach Laura Bradley, have nominated her in the ‘Outstanding Bravery’ category of the Pride of Ireland awards.

The Knocknacarra based group lifted an overnight embargo unexpectedly early this morning, to allow reporting of a rumour, widely acknowledged to have been dominating the important ‘lead up to St Patrick’s Day’ period.

Gleeson confirmed Laura had “really shown off her curves in a plunging black dress that left nothing to the imagination…but in a really, like, tasteful way?”

Second best bff Sinead Corrigan said “Laura is like a lioness, so it’s such an honour to nominate her for a bravery award?”

“Girrrl power! lols” she tweeted, after she had spoken.

The most earnest, least secure and newest member of the group, Aine Lally, agreed it was a shame the nomination had taken the spotlight off the rising death toll of Syrian children, but also “completely understandable, given that literally everyone wins with a feelgood news story, like this one?”

“In a way it’s a bit like that picture of the drowned Syrian kid on the beach? The one that caused a sensation and then turned out not to have happened? So, a shame? Yes. A surprise? Not at all”.

Wrapping up the press conference, all three stressed that although Bradley had first met Jennings while still engaged to her previous boyfriend, “absolutely nothing happened that night, no matter what ‘you know who‘ says.”

It was simply a shame, Gleeson added, that “some people” were trying to make way too much out of the coincidence that Laura who didn’t come home that night, had accidentally left her mobile in a girlfriend’s bag.

She then accompanied another girlfriend – who was feeling unwell but does not wish to be named – to the A&E where both spent the night which is why all her previous boyfriend’s attempts to contact her that night, were unsuccessful.

“And definitely not because she spent the night in Ian’s bed, ok?” 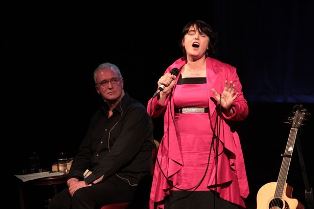